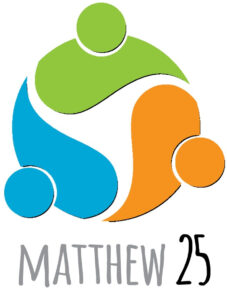 In May Trinity registered to be a Matthew 25 church. Now, on Christ the King Sunday November 21st, we are creating an entire service around the theme of Matthew 25.

Launched in 2019, Matthew 25 is an initiative of the Presbyterian Mission Agency of the PC (USA). Grounded in a reading of Matthew 25:31-46, it calls on participating churches to focus on three areas: building congregational vitality, dismantling structural racism, and eradicating systemic poverty. Churches may commit to one, two, or all three focus areas. We chose one area, poverty, knowing that all three overlap.

Since then, we have participated twice in a UCity initiative of Safe Homes for the Elderly and Disabled (SHED). In June and October, a group of volunteers from Trinity cleared gardens and did light repairs to the homes of local residents. Two representatives from SHED also presented their plans for the organization on a zoom call with Trinity members.

In addition, we organized a zoom meeting, which took place on October 3rd, to hear from Professor Mark Rank of Washington University about his new book called Poorly Understood: What America gets wrong about poverty. About 40 people, not only from Trinity but also the 11 other Matthew 25 churches in the Presbytery, attended the meeting.

Now, we take another step on the road God has mapped for us. Our service on November 21st will be dedicated to the Matthew 25 scripture with the theme of poverty. As the bible says: “Then the king will say to those at his right hand, ‘Come, you that are blessed by my Father, inherit the kingdom prepared for you from the foundation of the world; for I was hungry and you gave me food, I was thirsty and you gave me something to drink, I was a stranger and you welcomed me, I was naked and you gave me clothing, I was sick and you took care of me, I was in prison and you visited me.’”

There will be songs and prayers around the theme of the scripture.

And we are honored to have as our guest preacher the Reverend Phil Blackwell, who is the father of our very own Liz Nelson.

The Rev. Phil Blackwell served United Methodist ministries across northern Illinois for 45 years before retiring in 2014.  During that time he led congregations in a rural area, an industrial city, a northern suburb, and in the center of Chicago.  He also was a campus minister and a member of the Northern Illinois Conference staff.  His wife, Sally, and he moved to the St. Louis area last year to be near their two children and four grandchildren.

We hope very much you will join us for this service dedicated to Matthew 25. To find out more about the Matthew 25 initiative, please go to this site.